Yes Folks, it’s been a year, meaning — TIME TO CELEBRATE !

We are all very grateful for reaching this milestone as our very first use case, the Empire NFT Marketplace, turns one. Let’s take a peek at the most significant happenings throughout the first year of our NFT Marketplace.

Given the rising popularity of NFTs over the past year, it is not surprising that the current trend to sweep the globe originated in the crypto space. The combination of augmented reality and virtual reality in NFTs is a development in the industry that encourages the emergence of fresh, original technological solutions.

We launched the Empire NFT Marketplace a year ago on Binance Smart Chain, followed by Ethereum a month later. In January of this year, we introduced our NFT Launchpad, a tool designed for project developers, allowing them to launch their NFT project on our marketplace with full control of their NFT ecosystem. Later in April, we launched the marketplace on Solana, marking yet another milestone for the project.

In spite of all these features, we felt as if our marketplace was not ahead of its competitors. We thought we could improve the user interface and experience of the platform. Hence, a few months ago, we made the decision to revamp the WHOLE marketplace—with new features and design.

Let’s Catch Up with NFT Marketplace 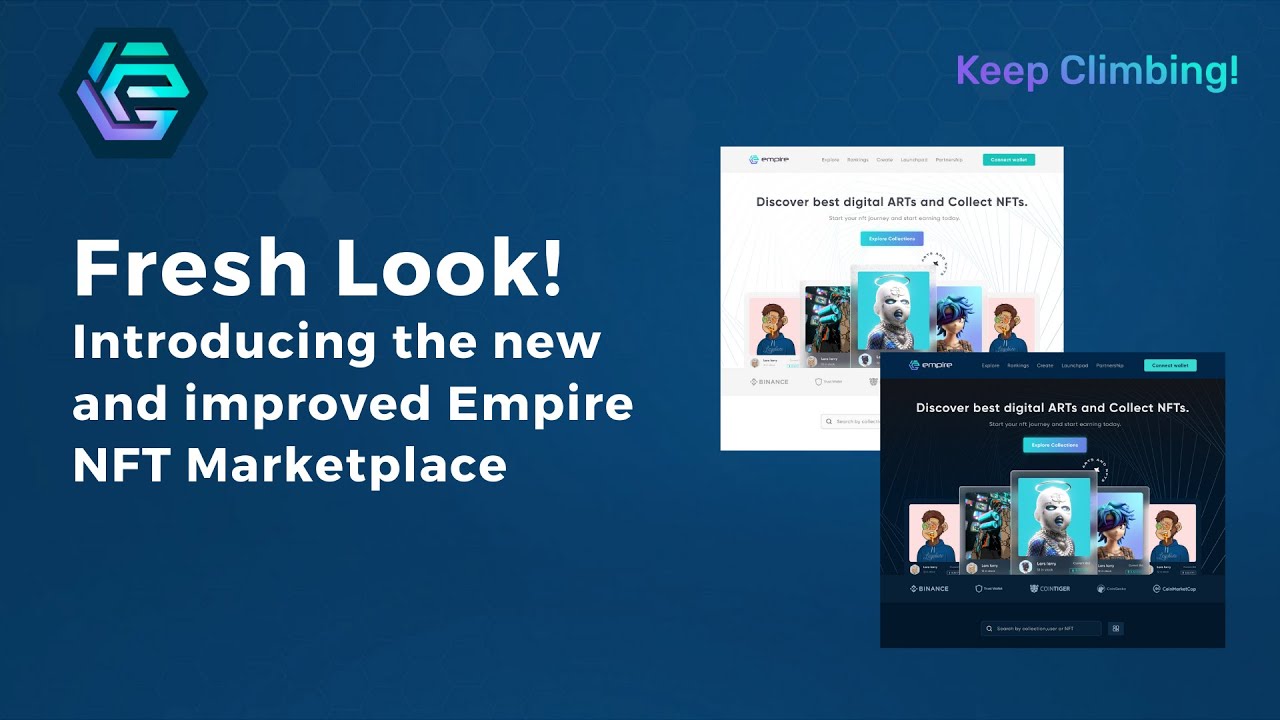 You may recall that we revealed the new NFT Marketplace UI screens a few weeks ago. The most recent upgrade provides a fresh new look, improved features, and extensive customization.

The user profile, advanced search bar, building a personalized collection, and many other frequently used marketplace elements have been enhanced for a more refined functional experience. The user profile section has been revamped to keep the overall look orderly, tidy, and fashionable. New visual effects have been introduced to help the user focus on what matters most.

Soon, the Empire NFT Marketplace will be integrated into DeFiGram.io, Empire’s core use case. Dubbed “The All-In-One DeFi Solution,” DeFiGram.io aims to change the game on the DeFi scene as it combines both DeFi and SocialFi features. Through the NFT marketplace integration, users will be able to trade NFTs within the DeFiGram.io mobile app.

Keep Up With Empire NFT Marketplace

Not too long ago, we also hinted about launching our own collection. Emperors of DeFi is the first collection that the Empire team has worked on. The collection will consist of 10,000 NFTs, 13 of which are rare pieces that represent various cultures. The collection will be launched soon after the new marketplace is live, so make sure to keep an eye out!

We have confidence in our abilities and believe the Empire NFT Marketplace is a fantastic venue for showcasing your NFTs and bringing them to the public’s attention. You have more options for minting, trading, and selling NFTs in the manner of your choice. Many more developments are on the way to present you with even more options. One feature that will be integrated in the near future is the NFT Licensing, which will allow creators to lease their assets for commercial use. This and other exciting events will be happening for Empire so don’t miss out and follow our social media pages!

DeFi is a huge space of its own. It is not a walk in the park to build something in this space and make it remarkable. But we have been doing our best to deliver, and we promise to continue on this route with you as a project that values its community. In the meantime, let’s celebrate a year of building our Empire!